I have a 2015 Chromebook Pixel that I bought almost a year ago. It isn’t my first Chromebook (in my opinion nobody should pay this much for a Chromebook if it’s their first experience with Chrome OS as a platform — it isn’t for everyone), so I was already well acquainted with its strengths and limitations.

With regard to updates, I have my Pixel in the “Beta Channel”. It’s the best of both worlds for me; I get to see newer features sooner, but not so soon that the device is constantly crashing (like what my experiences in the Developer Channel demonstrated).

Recently, due to my participation in the Beta Channel with one of the slated devices, I received the long-awaited update that allowed Google Play Apps (a.k.a., Android apps) on Chrome OS. I’ve had this on my Pixel for a little over a week now, and I decided to share my thoughts on the experience.

What it is and why it’s interesting

This update really only manifested itself in two key ways. First, the Google Play Store icon showed up pinned to the shelf, which allowed me to install Android Apps on my Chromebook.

Secondly, in my Chromebook’s settings, a small, unobtrusive new section appeared, allowing me to enable or disable Android apps. This works exactly how you are thinking. By launching the Play Store, I can browse Android apps and install them from there, just like on my Android phone or tablet.

For those among my readers who have used a Chromebook, you are probably aware of the limitations of these devices; they’re for web surfing and for consumption of cloud services — there is not substantial offline productivity and no way to install anything that isn’t a webapp. Because I use Google Apps for writing and simple spreadsheets quite a lot (as well as things like WordPress), these limitations aren’t a dealbreaker for me. On the contrary, the lightweight web-focus allows these devices to be blazingly fast and have a great battery life (I routinely get 11+ hours on a charge on my Pixel).

With that said, having some additional functionality introduced to the Chrome OS platform is not something I’d immediately reject. Being able to install and run on my Pixel some of the same Android apps I enjoy on my phone… that’s pretty slick. This greatly expands the utility of the device, at least potentially.

It’s pretty simple. I tested this out by searching for some of the Android apps I like — Google Keep, Gmail, et cetera — and clicked “install”. Just like an Android device, my Chromebook Pixel downloaded and installed the apps, depositing the icons for them in the Launcher.

If need be, one can manage a number of settings specific to the Android portion of this, via a screen that looks a lot like the Settings interface on my Android phone.

In this way, the Android footprint in Chrome OS feels like a “machine within a machine”, akin to virtualization. The Android bits seem pretty self-contained rather than seamlessly integrated, but I’m sure that’s due to the nature of what Android apps are — they are applications that run specifically with the Android Dalvik runtime environment, and as such are going to take certain forms all the time. This isn’t a bad thing, just an observation on my part.

What I find useful

The DSub music app just runs in its own window, like all Android apps on Chrome OS.

Some Android apps are a bit nicer than the web equivalents. Take Google Keep, for example. The web version I find kind of sluggish (especially on searches) and the interface a bit cluttered for my tastes. The Google Keep Android app by comparison is pretty snappy, intuitive, and easier to use.

Upon installing and playing around with this on my Chromebook, I immediately thought this is what I’m going to use going forward. It’s a total no-brainer, it’s that much better.

Likewise, I installed DSub, an Android app designed specifically for connecting to and playing music from Subsonic servers.

Don’t get me wrong, I really enjoy my Subsonic server. But the web interface isn’t exactly perfect. There have been some UI improvements in recent releases, but it’s still kind of counter-intuitive sometimes, and its lack of resume functionality is kind of frustrating.

Additionally, the Gmail app for Android works great on Chrome OS. It’s fast, simple, easy for quick reading and composition, and it loads faster than the webmail interface. 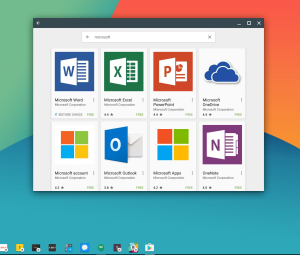 Some people will get really excited to be able to install things like Word and Excel on a Chromebook.

Another Android app I discovered is useful on Chrome OS is MX Player (and I installed VLC as well). A limitation of Chrome OS I have noticed over the past couple of years is the lack of ability to play much with regard to local media. I could take some video of my dog, for example, just using the default recording functionality of my Android phone, and my Chromebook wouldn’t be able to play it (unless I uploaded it to Youtube or something and played it that way). No more!

With the ability to install robust video player apps designed for Android, now I can play local media with literally any encoding I’ve tried so far!

Another angle (which applies more for others rather than for me) of which to be aware is the fact that Microsoft has a fair number of pretty good Android apps available for free. For people that need this functionality, this greatly expands the capabilities of Chrome OS as a platform and might no longer pose as many dealbreakers to stepping away from Windows itself. If that functionality is enough for such users, this is a game changer.

It’s something to consider. I mean, look at this!

What a strange world in which we live.

As always when implementing new functionality on any platform, there are some things that either don’t work, don’t work the way one might think or expect, or are a little flaky for now.

The first thing I noticed is that while one can pin these Android apps to the shelf (which I immediately did for apps I found useful), after a reboot of the Chromebook itself, these apps are no longer there. They’re still installed, and I can find them in the launcher, and I can even re-pin them… but another reboot and they aren’t pinned again.

This seems like a bug to me, but you never know. Sometimes Google has some really puzzling ideas about how things should work. I’m hopeful that an update will fix this behavior (assuming they consider it broken).

Other things are not so much bugs, but just form factor. Android apps are usually designed with touch in mind. While the 2015 Chromebook Pixel has a beautiful, responsive touchscreen, it isn’t very conducive to effectively playing most Android games. You can work with other apps (like the ones I mentioned above, Gmail, Google Keep, DSub, etc.) reasonably well with the touchpad or with a mouse, but games require a different level of interaction that I found to be cumbersome at best. Your mileage may vary, of course.

I also found a few apps that wouldn’t install, claiming compatibility issues with versioning. My assumption here is that the Android runtime that got installed as a part of this Chrome OS update is probably at specific development levels in the key libraries, and some Android apps just won’t work in that, depending on what version or versions for which they were developed. I’ll keep trying some of them to see if this changes; it’s not a major problem — most apps I tried installed and functioned just fine.

I am also of course keenly aware that this is still in beta. There are going to be some rough spots here and there, that is to be expected.

All in all, I find this implementation of Android on Chrome OS to be pretty impressive. In some respects, it greatly expands the capability of Chrome OS as a platform, which will certainly make it vastly more appealing to some people who have specific needs that Chrome OS has not been able to provide up until now. Even for those of us who had already found Chromebooks to be useful can find some immediate advantages to being able to install and use Android apps on these devices.

In fact, now when using my regular Linux laptop, I find myself wishing I could install a couple of particular Android apps on it because I discovered how useful they are on my Chromebook.

While not everything is perfect in this, some by bugs, some by design, it’s well-implemented overall. Like most parts of Chrome OS, it quietly stays out of the way unless you need it, and in those cases, it is implemented simply enough that one can figure it out without effort.

I think this is the first real visible step Google has made toward unifying the two platforms — Chrome OS and Android — and this is a tantalizing glimpse at some of the potential in that unification. As a user of both, I’m extremely interested in seeing this mature as a concept, and I find it exciting to think that both platforms may benefit from cross-platform functionality.