I have a 2015 Chromebook Pixel that I bought almost a year ago. It isn’t my first Chromebook (in my opinion nobody should pay this much for a Chromebook if it’s their first experience with Chrome OS as a platform — it isn’t for everyone), so I was already well acquainted with its strengths and limitations.

With regard to updates, I have my Pixel in the “Beta Channel”. It’s the best of both worlds for me; I get to see newer features sooner, but not so soon that the device is constantly crashing (like what my experiences in the Developer Channel demonstrated).

Recently, due to my participation in the Beta Channel with one of the slated devices, I received the long-awaited update that allowed Google Play Apps (a.k.a., Android apps) on Chrome OS. I’ve had this on my Pixel for a little over a week now, and I decided to share my thoughts on the experience.

END_OF_DOCUMENT_TOKEN_TO_BE_REPLACED

My Choices of Applications Lately

I frequently find it useful to read about the applications other people use for various functions because it inevitably prompts my natural curiosity. I almost always end up thinking, well, I haven’t tried that program… I should install it and see how it is. It’s good to expand one’s horizons.

Because of that, it’s something I like to write about from time to time here. Most people have good reasons why they use the apps they use, so here are a few of mine. I have included links to things wherever appropriate, and they are set to open in a new tab, for the convenience of the reader.

END_OF_DOCUMENT_TOKEN_TO_BE_REPLACED

I didn’t realize it as I was writing my post yesterday, but I had surpassed 100 Linux Critic posts in doing so.

I started this blog in 2009. At the time, I had several reasons for it.

Because a friend told me to

One of my good friends was starting to tinker with Linux back then, and once in a while he’d ask me how to do something. I’d usually write up some kind of howto for him and email it or send it to him via chat, to try to help out.

One day he suggested that I start posting these tutorials and howtos on various Linux and open source products in a technology blog so that others could enjoy them.

Because it’s a good reference for myself

I used to keep pretty copious hand written and digital notes for myself on various things I’d figure out in the Linux world. Now I don’t really do that. I find myself instead referring to my own posts here for reference. Whenever I figure something out that I might need to figure out again some day, I do a quick (or sometimes not so quick) writeup.

Because I was unemployed at the time

Being between jobs sucks. In 2009 I spent several months in that state. I’m not the type to sit idle, however, so I created this blog as a way to keep busy, provide some incentive to myself to keep exercising my technology muscles, and to have something to show prospective employers who might ask me about my gap in employment history.

I’d say, “I created a Linux and technology blog and learned how to promote it using Twitter and other social media.” Sounds silly, but it actually did get me a real job at one point, or at least contributed to that process. And I did learn a lot about technology blogging and promotion in the process.

I probably wouldn’t have posted much content here if nobody bothered to read it, so I wanted to say thank you to my subscribers, those who come here in search of something specific and decide to stay a while and browse my other posts, and my other regular readers who keep encouraging me to share my thoughts on Linux and technology.

I’d also like to thank my good friend Joe, who guest-wrote some really good content here as well (some of which still brings in a ton of traffic on a daily basis) for contributing to the success of this blog. At some point I’ll see if I can sucker him into writing some more!

Last but not least, I’d like to thank Susan Linton. She founded Tuxmachines.org, and before she sold the site to Roy Schestowitz, Susan used to pick up and run almost all of my posts, which brought Linux Critic to a much wider audience. Not sure what you’re up to these days, Susan, but if you’re reading this, thank you!!!

If anybody reading knows Susan and is in touch with her, please pass this along!

Just a little blurb this morning, I thought I’d mention something about Xfce that I’ve really liked in my using it this time around: Whisker Menu

To be perfectly clear, I never had any issues with the old style accordion menu but I noticed that the version of Xfce that is in the repositories for my distro had something called “Whisker Menu” included.

One of the things I have always liked about the Cinnamon Desktop Environment from the folks at Linux Mint was the flexible and modern slab-style menu. You could say that Microsoft invented this approach back when they released Windows XP, and you’d probably be right, but the execution of this approach has always been better elsewhere, like in the Linux world. 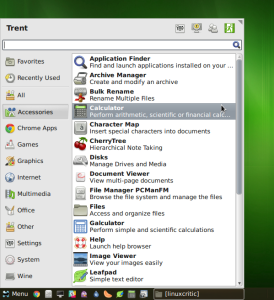 I flip around what side the categories are on. Deal.

Anyway, the Mint devs did a great job with the menu in their Cinnamon environment, so I was really intrigued when I ran across a new menu plugin for Xfce.

Whisker Menu is a slab style menu, and it’s every bit as flexible and usable as Cinnamon’s.

I like the way it looks, and it’s snappy and responsive as well. I’m able to customize what appears on it and how, and I can even set on which side I prefer the application categories to appear, which is a nice touch of flexibility.

Give it a try!

I wasn’t going to write a full Xfce review here today or anything. I just figured I’d point out something new (to me) in Xfce these days that caught my attention. I’ve definitely been appreciating finding some good elements of application and UI design lately (when in so many other circles those things are few and far between).

So, if you’re an Xfce user and haven’t played around with Whisker Menu, give it a try! And if you’re not an Xfce user, and the now-antiquated feeling accordion menu isn’t your thing, this is probably worth a look for you. If it’s not included in your repositories, you’ll probably need to add the ppa, but otherwise, all you have to do is right-click on your panel and select “add to panel” and if it’s an option, you can put it wherever you want it.