Having a Linux Mint look and feel is nice, but it’s not the real reason I was eager to give this CE a try. Back when I first worked with LXDE, I noted that it had tremendous potential as a desktop environment, but also that there were certain things about it that were really holding it back. From an end-user standpoint, a fully-configured LXDE had all the makings of a fast, easy-to-use environment, but getting LXDE configured was problematic. Documentation was spotty and, in many cases, incorrect. Getting critical background apps running on startup (such as the wireless network monitor) was an adventure. Creating desktop icons (if you wanted to go that route, which I did) was a hassle. So after kicking the tires, it was time to pop the hood.

The first thing I checked out was the “Desktop Sessions Settings” under “Preferences.” This was exactly what my previous go-around with LXDE had been missing: a list of applications to start once the desktop was entered: applications like mintUpdate, Remote Desktop and Network Manager. You know, critical apps that provide basic functionality. I’m pretty sure it’s just the lxsession-edit application (at least, I think that’s what it’s called), but my beef was that it wasn’t included in the core install or in the apt repositories when I last used LXDE. I don’t know if that’s been resolved or if Kendall put it in himself, but what matters is that it’s there. 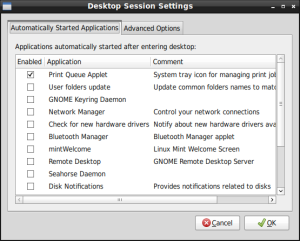 The Desktop Settings Menu is a vast improvement over editing files in /etc/ by hand.

Unfortunately, control over the desktop and menus still require the use of a text editor. Unlike Fluxbox, which is easily managed, adding apps in LXDE sometimes involves creating .desktop files and placing them in /usr/share/applications – a process that can be cumbersome, particularly since it requires superuser rights. On the other hand, if you create a .desktop file (or you copy a .desktop file over from /usr/share/applications) in your $HOME/Desktop folder, the application will appear as a launcher with its appropriate icon right on your desktop.

The inclusion of the Desktop Session Settings graphical tool is definitely a big step forward when compared to trying to manually configure that functionality in a do-it-yourself LXDE, but like Joe, I’m still dismayed at how many hoops one must jump through in order to create any kind of launcher on the desktop or the panel, particularly when it involves an application that isn’t listed in the “Available Applications” list.

Unlike Joe, rather than go through the arduous process of hacking out custom .desktop files, I found that the lazy man’s approach of creating my own shell script launchers for certain things (like rdesktop sessions and some standalone apps that aren’t “installed”, per se) and then creating symbolic links to the shell scripts in the Desktop folder worked well enough. Sure, the symbolic links don’t look as pretty as shiny .desktop files with a designated icon, but I could create them more quickly than a .desktop file, didn’t have to be root to do it, and they worked just as well.

No .desktop file needed, just a symbolic link in the Desktop folder to a shell script that launches the app.

Cheesy? Yes, admittedly so. However, this is a shortcoming of LXDE’s lack of maturity as a desktop environment, to be clear, not a problem with its implementation. The average user probably wouldn’t have these sorts of problems because most average users aren’t going to be creating custom launchers to applications that don’t appear in the “Available Applications” list anyway. Still, it’s one of the things that reminds me why I prefer Fluxbox. While Fluxbox might not be as intuitive as the more traditional desktop presented in LXDE, it’s a heck of a lot easier to configure, and if you’re a computer control freak, you can literally tweak it sixteen ways to Sunday to make it behave the way you like. With LXDE, you’re fairly stuck with what you get unless you do some pretty serious gymnastics.

Because I deal with older hardware at times, I need an environment that is lightweight yet has a fairly easy learning curve for non-technical users. LXDE is lightweight yet offers enough familiarity to Windows users that basic tasks, such as running a common program from a menu or desktop, are easy. The difficulty in managing an LXDE installation is really on the management end. From that perspective, Mint 8 LXDE CE does a great job working with the tools provided. Additionally, the default set of included software is very good and appropriate for this environment. In addition to the usual suspects (i.e. Firefox, OpenOffice.org, the GIMP, etc.), this edition includes LXTerminal, Leafpad, the full suite of Mint tools and a variety of media players and other accessories. LXDE itself is rough around the edges at times, and Kendall did a good job making it easy to use LXDE’s tools where possible, and pre-empting the whole situation otherwise by making sure things are in working order and pre-configured correctly.

This is going to sound nit-picky, but that’s because there isn’t much about this distro that I seriously dislike that doesn’t relate to how LXDE handles things (see: .desktop entries and menu management.) That said, I would have liked to have had a “Take Screen Shot” option included. Kendall is aware of this and has said he’ll have that corrected by the time the final version is released. That’s one of the things I love about FOSS, by the way: the community provides feedback, and the people doing the heavy lifting pay attention. It’s great. I’m also underwhelmed by pyneighborhood. In my work environment, I couldn’t get it to recognize our network drives (something I was able to do in both Gnome and Fluxbox), but I worked around that with a shell script (with a bit of help from LC’s Patrick.) I do really wish there were some sort of menu management tool out there, though…

Because I’m also testing this on an older computer, I like the fact that LXDE is very fast when compared to GNOME, KDE, or even Xfce on the same hardware. I was surprised at how fast it boots and how responsive it is. While just above I mentioned that I prefer Fluxbox, and will most likely be going back to it once I’m done kicking the tires on this release, I’ve found myself still enjoying Mint LXDE in spite of that, at least, once I got things set up and hacked out to the way I like them. I did a fair amount of work on OpenBox last summer, so I think that if I were to stick with Mint 8 LXDE CE, I’d likely disable some of the more restrictive, inflexible LXDE functions and rely on the more Fluxbox-like OpenBox underpinnings instead.

That said, if I had the chance to configure things to a user’s needs beforehand, I would have no reservations in putting Mint LXDE in front of a non-technical user to use as their main environment, especially on older hardware. That is my primary interest in LXDE, after all, and I still think it has enormous potential there.

I like PCManFM as a file manager, since it’s fast, behaves the way I expect a file manager to behave (except for having no option to disable the stupid delete confirmation dialog, grrrrr), and unlike Thunar, it’s tabbed.

I should also mention that I find Mint LXDE to be aesthetically pleasing, from the theming that was applied to it, to the panel and the icon set.

Power management worked fine out of the box, and Flash was installed and functional right away. I was also able to play music and video without any issues as I have come to expect from any Mint release.

I mentioned above the rather inflexible methodology necessary in creating launchers on the desktop and on the panel, and I’d have to reiterate that that’s probably my biggest beef with LXDE in general, so this packaging of it is no exception.

I also found no way to do screnshots (until I did an sudo apt-get install gnome-utils to get gnome-screenshot), and like one of my few complaints about Linux Mint 8 Fluxbox CE, there was no way to disable the touchpad on my laptop without my having to resort to a shell script to do it.

I also experienced a number of crashes, and while I managed to isolate the cause of these crashes to a single application that I installed myself, it demonstrated the fragility of LXDE if anything manages to crash the desktop management part of PCManFM. There’s no way to recover from such a meltdown short of a hard power down and reboot (and I tried everything I could think of to find a way to shut down cleanly, restart X, anything).

I’ve maintained for some time that LXDE has a lot of potential, if only the rough edges could be smooth. Part of the problem is documentation, part is management tools. Many of the distros do a good job working around that, and Mint 8 LXDE CE is no exception. I would go as far as to say that this is my favorite incarnation of LXDE, and one I will very likely continue to use in the future.

As I mentioned above, I’m likely going to go back to Fluxbox, and most likely Linux Mint 8 Fluxbox CE to be exact. However, now that I have Mint 8 LXDE configured and tweaked (and I know what one application to NOT run on it), I’ll likely use this for at least a while longer because I do enjoy it now that I have the wrinkles of everyday use ironed out. Mint 8 LXDE CE is by far the best implementation of LXDE I’ve yet seen, and for a tried-and-true Fluxbox user to be happy using something like LXDE, that’s saying something. Like Joe, I’m not very forgiving when it comes to environments that claim to be “lightweight”, and to say that I was impressed by Mint LXDE’s speed and limited use of resources is an understatement.