As I mentioned on February 12th, the long-awaited Fluxbox Community Edition of Linux Mint has been released, and I’ve had the opportunity to install it on my laptop to give it a whirl.

I promised @Kendall — the man who picked up the Linux Mint Fluxbox CE torch and ran with it to keep this project alive — a review, so here goes!

Linux Mint 8 Fluxbox Community Edition is based on Linux Mint 8 Main Edition, the 2.6.31 Linux kernel, and Fluxbox 1.1.1. As a longtime Fluxbox user and a recent enthusiast of Linux Mint, I was pretty excited that there was going to be a Fluxbox Community Edition based on the most recent Mint release, because to me it seemed like the best of both worlds — the streamlined, clean “cohesiveness” I’ve come to enjoy in Linux Mint, plus the fast, highly customizable Fluxbox that I tend to install on my own anyway, regardless of what default desktop or window manager is included in any distro I’m using.

And while I’m perfectly capable of getting Fluxbox to work on top of Ubuntu and Linux Mint alike, I really wanted to see what Mint would be like when implemented with Fluxbox as its centerpiece, as a distro, and I can say, I haven’t been let down.

So, down to brass tacks, as it were, I have Linux Mint 8 Fluxbox CE installed on my five year old Toshiba Satellite A75, which seemed to be an excellent test bed for a distro release designed to be optimized for limited resources.

I’ve taken a number of screenshots immediately post-install so I can show readers what things look like before I tweak and customize things to the way I like them. Any of my thumbnails below can be clicked on for the full-size version.

I’m going to go over what the main items are first, and I’ll express my thoughts on them and their implementation after.

Anyone reading this review is probably already a Fluxbox user, and as such probably doesn’t need an A to Z rundown of the installation process in this release. I’ll sum that part up by simply saying that the Linux Mint 8 Fluxbox CE installation process runs just like the default Linux Mint 8 Main Edition install, using the Ubiquity installer with all the same options as Ubuntu and regular Mint.

Once installed, after a reboot, the user is greeted by a lightweight and Mint-themed SLiM login manager.

Same wallpaper and shiki theme from the Linux Mint 8 Main Edition, and I found it to be aesthetically pleasing and quite clean.

Upon login, the user is greeted by a welcome screen familiar to those who have used Linux Mint 8 Main Edition: 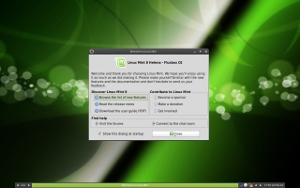 The default menu is a very simple, basic Fluxbox menu, with commonly used items at the top — “Home”, which launches the default file manager (which I’ll get to in a minute), “Web Browser”, which launches the default browser, and several other menu options for other basic things — and categorized, dynamic menus below a separator. Under the bottommost of these, the “System” menu, users will find the Fluxbox menu, which Fluxbox users will find familiar and useful for configuring their window manager via Fluxbox’s default options.

Astute observers will note the presence of VolWheel in the notification tray, a basic volume control and sound manager, as well as the GNOME NetworkManager Applet. 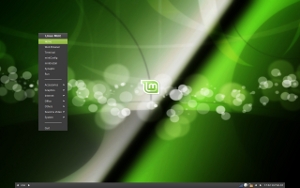 This release doesn’t have GNOME installed, preferring instead a mix of lighter weight, faster applications drawn largely from Xfce and LXDE. As such, here we have Thunar as the default file manager: 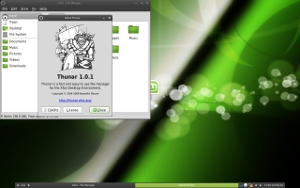 For the default terminal, I found that LXTerminal had been selected for this role:

Sylpheed is the default mail client:

We have Pidgin for instant messaging: 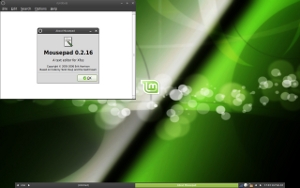 In addition to these and other default applications for various functions, Linux Mint 8 Fluxbox CE also includes the very useful MintInstall, and (unique to the Mint Fluxbox Edition), mintConfig: 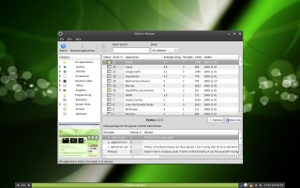 MintConfig is a nifty everything-in-one-place graphical control panel for this environment, which conveniently puts everything together for you. I still tend to prefer configuring my Fluxbox by hand, editing the files with a text editor, but if you’re not that sort, this release saw fit to make life a little easier on some of you by including a number of well-established graphical tools to manage your Fluxbox menu and keybindings and other settings. They’re not really my cup of tea, but I have used them and they certainly seem to work fine in this implementation.

Next Page: The Linux Mint Fluxbox experience, Cons and Pros