Theming and other configuration 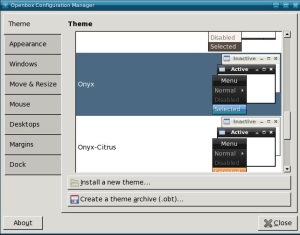 One of the default options on the Openbox menu is “ObConf”. This is a graphical configuration tool that houses the basic settings for Openbox as a window manager. Here you will find a bunch of self-explanatory options, including a “Theme” tab that houses a generous number of default skins for the look and feel of Openbox. Go through all the various tabs in ObConf and set things to behave the way you like them.

I have been using Openbox on my laptop for a couple of weeks now, and I found myself liking it more than I had expected. Like Fluxbox, it is very fast, lightweight, clean, stable, and configurable to a very high degree. It is also very modular, and it plays nice with other applications that can be added onto it (such as the dockapps I use, and LXPanel, just as a couple of examples). I also find Openbox to be visually appealing, which surprises me, as I don’t tend to like the look of most GTK widget based applications.

The documentation (which is found here) available for Openbox is pretty good about most things, though when I was having trouble getting my dockapps to behave themselves on startup, I was left mostly to trial-and-error land, so I was a bit disappointed in the lack of help I found online for that. Hopefully if anyone else out there has had similar problems, my line or two on the subject will be more help to them than what I had found in my time-consuming Googling and troubleshooting last week.

The project’s home page also includes a very nice list of Openbox-friendly applications, but I would actually like to see just a little bit more cohesion in the project. Like Fluxbox’s toolbar, it would be nice if Openbox had a default panel, which could just as easily be turned on or off depending on the minimalist tendencies of the user, and as someone who hates editing XML files by hand, it’d be nice to see Obmenu (or something similar) just integrated into the ObConf configuration app, because the lack of a graphical menu editor makes Openbox painful out of the box. I was puzzled by this; Obmenu is nice, but that functionality really needs to be built into ObConf in my opinion.

That said, Openbox’s modular nature is firmly in the “pros” column… it means that it can be VERY barebones minimalist, like it is right after a clean install, or as busy and full-featured as the end-user cares to make it with the wide variety of applications one can bolt onto it.

One downside to Openbox is with ObConf. It’s a bit too simplistic for some things. One area is the menu, which I have already discussed, but it also needs a way of being able to configure the key bindings that Openbox uses. ObConf is basically a graphical front end to edit an XML config file for Openbox, which means that there is really no reason it shouldn’t have a built-in graphical menu editor and a keyboard and mouse bindings editor as well. 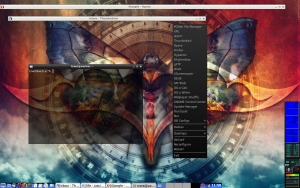 The alternative to handling keyboard and mouse bindings, according to the documentation, is to manually edit that rc.xml file under the keyboard section. While the documentation is very good for this process, and the keyboard and mouse bindings are very logical and well thought out, this is unnecessarily tedious. I found that I could get Openbox to do everything that Fluxbox can do with its /~/.fluxbox/keys file, but I found the task of editing the rc.xml file to be pretty daunting and tedious by comparison to Fluxbox’s much simpler approach.

And believe me when I say, if you screw something up in Openbox’s rc.xml file — and no matter how careful I was while tweaking it, I did screw something up eventually — you end up with a non-working window manager, and that’s just a pain. I ended up having to go into Fluxbox, edit the rc.xml file again and try to fix what I broke, and log out and log back into Openbox again to see if it was still broken. You get the idea. My point is, all of that could be avoided if there was a better graphical front-end to this process in ObConf.

Overall, ObConf does do a pretty good job of giving the user enough options to satisfy even a tinkerer like myself, but for me, more in the configuration screen is always better, particularly if it means I can avoid having to dig through a 720 line XML file (ugh) to find the setting I want to tweak.

My conclusion is very positive. As a Fluxbox guy, I found Openbox to be very nearly as capable and flexible as Fluxbox, even though it does need a little maturing as a project. I like it well enough that I will probably keep using it on my laptop, though due to some weird problems I had getting it to behave on Slackware, I’m going to be sticking with Fluxbox on my primary desktop machine.

Openbox has a promising future, and given its modular nature, means that there will only be more — not fewer — possibilities down the road for this versatile window manager. It runs very well on my laptop’s limited hardware, so like Fluxbox, I expect Openbox would make an excellent Netbook window manager.

I find Openbox to be aesthetically pleasing, and have been able to make it look very nice, which is one of the aspects I’ve always loved about Fluxbox. Openbox is very sharp looking, and inherently very themable, so you can make it look more or less however you like it to look.

At any rate, if you’re looking for a lightweight, fast, clean window manager, Openbox is a great option to explore. Give it a try, you won’t be sorry!

9 thoughts on “Openbox: A fun and lightweight window manager”